It was a cold and rainy Thursday night. I was working late at the adoption center when the phone rang. The woman asked for me. It was a young lady who found a stray bearded dragon on the streets of Dorchester. Right now it's in a cat carrier, and she's afraid to touch it. I wondered how she knew to ask for me. I am gaining a reputation quicker than I thought? I scheduled this woman to come in the next day with the bearded dragon. 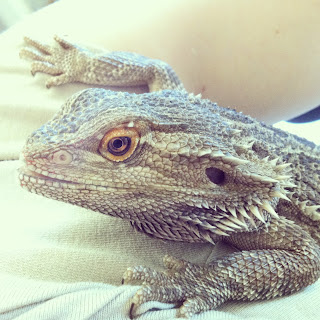 When it came in, I realized it was a male and an adult. It looked under the weather, literally and figuratively. I was well prepared for his arrival. I had already chopped out an epic salad and made a warm habitat for him. By the end of Friday night while working late again, I realized he couldn't move his right leg. I knew then that he needed to see a vet. I'm sure my fiance is getting used to my calls by now, pleading that we spend at least half of our only day off together to go to the vets with a reptile we don't even know. He knows enough by now to say okay. The founder had called him Roscoe, and I kept the name. So, I packed up Roscoe for the train ride home, abandoning my own personal items at work. He saw my favorite vet, Dr. Mertz from New England Wildlife Center. I sometimes wonder if he is sick of seeing my face with a banged up or severely ill reptile in tow. 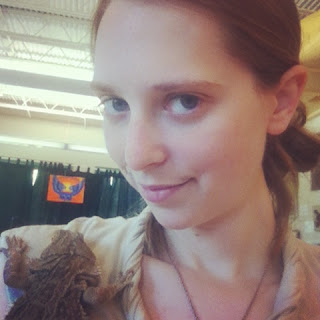 Roscoe and myself at the vet

He found out that Roscoe has metabolic bone scoliosis, hence the right leg. This is something that he has to live with unless an owner would prefer amputation. For the most part, it is something you just have them live with as a handicap. He also told me he is certainly underweight and sick. I took him home with his medication. We bought various beardie supplements on the way home. He won't eat on his own. He won't drink on his own. And naturally, won't medicate himself. Every day, my fiance and I forced fed food, water, and medication. Any time we approached him, his beard went black. I know, you hate us, Roscoe. Being that he is contagious, we had to be very careful not to get the rest of our clan sick. We fostered him for a week. 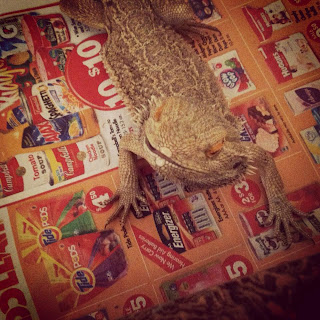 We luckily found him a wonderful home with a father-daughter duo who is well versed in sick and injured bearded dragons. They own quite a few. The daughter, Lauren, volunteers at the New England Wildlife Center. She does amazing work with her beardies. It is satisfying to know we saved another life. I am so thankful to Lauren and her father for taking on such a wonderfully charming bearded dragon who deserved a second chance at a better future. 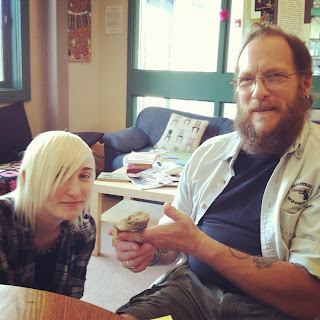 Roscoe with his new family
Posted by Lex at 10:20 AM