Little Foot's favorite thing to do: bask on her dock

Email ThisBlogThis!Share to TwitterShare to FacebookShare to Pinterest
Labels: eat, food, Salinger
Mom, don't bother me while I take my 5th nap of the day! 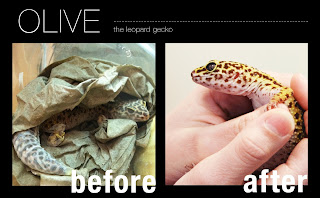 Picture credit on the right belongs to Elizabeth Dobrska

Email ThisBlogThis!Share to TwitterShare to FacebookShare to Pinterest
Labels: Animal Rescue League of Boston, foster, gecko, leopard gecko, Olive
And look what happened yesterday: Olive was adopted by a wonderful family! This is pictures of me, her, and the father of a 13 year old son who will be taking wonderful care of Olive from now on. It is a surprise gift for the reptile enthusiast! It was a perfect match from the geck-ko! haha. This is my first successful foster "child" to make it to adoption and what a wonderful feeling. We will miss our little gecko girl, but I couldn't be more happy for her. She finally has her forever home. 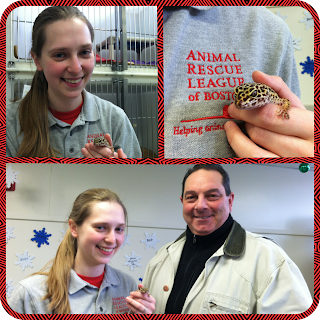 Email ThisBlogThis!Share to TwitterShare to FacebookShare to Pinterest
Labels: adopted, Animal Rescue League of Boston, foster, gecko, leopard gecko, Lex, Olive
This is our foster gecko Olive when she first came into our care. She certainly needed our help!

Email ThisBlogThis!Share to TwitterShare to FacebookShare to Pinterest
Labels: bath, Salinger, tortoise
Hermes' first introduction to Helix. When Hermes became TOO interested, we then separated them.

Franklin and his food puzzle

This is Olive, my foster gecko. She is available for adoption at the Animal Rescue League of Boston!

Email ThisBlogThis!Share to TwitterShare to FacebookShare to Pinterest
Labels: Animal Rescue League of Boston, foster, gecko, leopard gecko, Olive
It may be cold out, but Salinger is warm on her indestructible heat mat

Email ThisBlogThis!Share to TwitterShare to FacebookShare to Pinterest
Labels: heat pad, Salinger, tortoise
Helix cracks a smile at me

It was just another day where I took a picture of my cat. We all joke about how the internet is pretty much about pictures of cats. And why shouldn't it be? It got me thinking about all these websites and blogs about cute animals. Well, my animals are cute! I decided to create this blog to just basically post pictures with occasional anecdotes about what is going on with them. (Because there is always something going on with them). Oh hi, I'm Lex by the way. The animals featured in this blog will be: 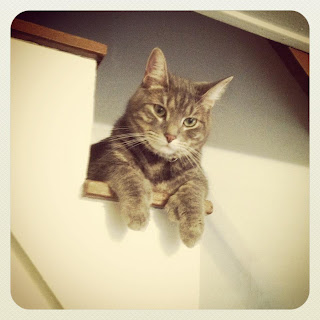 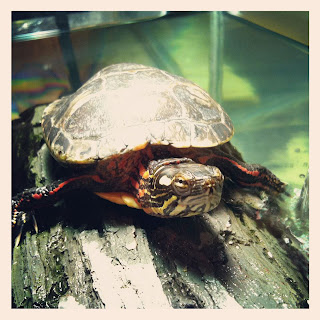 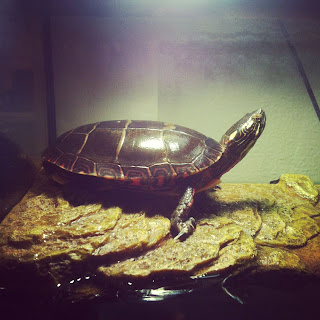 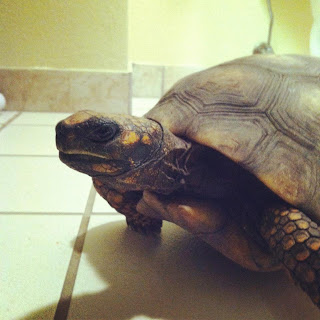 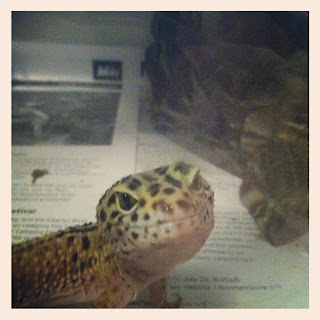 Helix - (Normal) Leopard Gecko Male, age unknown but estimated to be a year and couple of months

So these are the pookas. What is a pooka, you ask? I have no idea. The word came to me when I adopted Hermes years ago. I started to call him Pooka Bear. And then just Pooka or Pook. Then all the animals became Pookas. And then myself and my fiance also became pookas. Basically, to be a Pooka means "our family." When we fostered Helix, the last member of our family (so far), we knew pretty quickly that he was a "Pooka" so we adopted him. We have also had "foster pookas" in the past and may continue to do so since I work with animals. They may be on here every once in awhile. Anyway, enjoy cute pictures of animals. :)