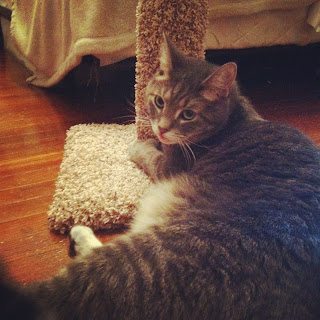 On April 27, 2013, my cat turned 3 years old. Well, not exactly. I adopted him when he was only 5 months old with an estimated birthday to be around late April. With most animals, having an exact birthday is darn near impossible. As Hermes turned another year, I wondered how old he really was in human years. At 2 years old, he was estimated to be around 24 human years. Depending on some calculators, now he is 29 or 30 years. Once June 2nd comes around this year, Hermes and I will be the same age. It was laughable and yet reassuring knowing that my cat and I are battling our late twenties together at the same time. Maybe we will go through our mid-life crisis together?

As I find myself not keen on the idea of another year older, I wondered if Hermes was also feeling the same way. I decided to give him a pick-me-up with some strong catnip on his new scratching post. He is still a kid at heart. For his birthday presents, I gave him new toys to play with--as always, some were a hit, some were a bust. I should just buy a years supply of mylar balls. Those 50 cent wrapping paper looking type balls never lose their novelty with him.

As Hermes went from college graduate to stable career man this past year, I noticed some changes in him. He became a lap cat and desired more of our attention and affection. He is finally matured enough to realize the important things in life: family. and food.

Spencer and I decided to take on another foster gecko. She was surrendered already knowing she had a pre-existing condition, metabolic bone disease. I just didn't know how bad. First, she was surrendered as "Carl - 2 years old." We found out that Carl was really Carlie just a day or two later. When I first met Carlie, she couldn't even see. The shed of her skin was stuck to her entire face and parts of her legs. I immediately soaked her in warm water for a long time. After the next couple of days, we are able to peel of the skin on her face so she could see. We then slowly peeled off the rest. What was also blatantly obvious is that her spine was crooked and humpback. 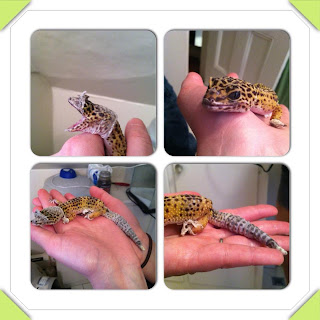 Needless to say, she was in worse shape than the others, but Spencer and I were up for the challenge. We brought her to Dr. Mertz at the New England Wildlife Center Odd Pet Vet. He told us that her deformity was pretty much for life (also her minor leg paralysis), but we could help her with shedding. We started her on 0.1 cc of antibiotics per day. She was close to losing her tail and very underweight. We did our best to fatten her up, socialize her, and help her with shedding. After a couple of weeks, she started to prolapse a little under the stress of holding her. She was always able to kick it back in fairly quickly. However, one Sunday night, she prolapsed so much that her lower intestines were out. We put her in a shallow pool of water with a paper towel in it to keep her moist. Unfortunately, she needed serious repair or she would die. We contacted our vet, and he told us that she lost muscle control in her back end due to the calcium deficiency. She will continue to do this most of, if not, her entire life. That's when I realized she would not be adoptable. We made the difficult decision to rush her to my work, Animal Rescue League of Boston, to put her down. Spencer and I miss her so much. She had a wonderful temperament. She was calcium deficient during infancy and childhood which resulted to her demise. I couldn't help wondering what other reptiles like her are suffering the same things due to poor nutrition. When we came back home, I spent a long time watching Helix, our own gecko. I felt so fortunate that he was a healthy boy. Not every gecko is so lucky... 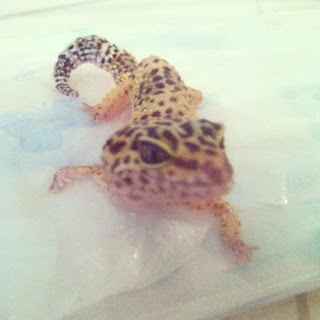 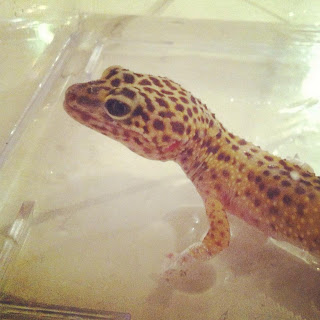